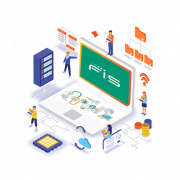 Integration of Profile with solutions based on newer technologies can be compared to replanting a mature tree. For the numerous benefits, it is worth the effort, however, it must be done with caution.

FIS Profile is a well-known core banking system, but its role and place in the core banking architecture have changed over the last several years. Made in the USA, the system hasn’t reached no. 1 in its class, but it has been widely deployed, especially in medium-sized banks. Profile is valued mainly for its well-developed Product – Customer – Account architecture and the reliable real-time transaction processing.

In the past, when choosing Profile, the bank based its entire architecture on the system. Profile modules were almost exclusively used to support the bank’s functional areas. Therefore, every legal and business change had to be introduced as part of the system parameterization or adaptation. Unfortunately, this type of banking IT architecture structure is inefficient in the current, agile business context. And although Profile works well in balancing, transaction processing or charging interest, new banking functionalities are designed as separate applications. Developed in popular languages, e.g. Java, they are then integrated with the central system. Currently, Profile operates most often in such a model. It supports a “lean” core, supported by numerous integrated applications, whose implementation and maintenance is easier, faster and cheaper.

The heart of banking: to replace, or not to replace?

Among Profile users, there will be those who claim that the system is simple and intuitive, and those who appreciate its functionality, but emphasize that few specialists can fully use it.

Profile works best as a core system, but it is challenged by solutions based on newer and cheaper technologies. Its biggest competitors are Temenos Transact and Infosys Finacle, which are rated by Gartner.com users at a similar level, between 4 and 4.5 out of 5 possible points.

Core system replacement is a complicated operation. Smaller banks can switch to the new system within 6 to 12 months. In larger banks, the challenge is even greater and often means moving one element at a time. Hence, large organizations that already use the Profile system are unlikely to replace it. Instead, they choose the hybrid model described above, based on the latest version of Profile, following the lean model. It assumes regular upgrades of the system’s versions and further adaptation to current market needs as well as ongoing maintenance works. This model works well for our client, ING’s SSC.

As mentioned above, instead of completely replacing core systems, most banks prefer to “wrap up” the existing core with new solutions. But in the model that uses business applications as an architecture support for the Profile system, it is not only knowledge of new technologies that counts. Without the in-depth knowledge of how the bank’s “heart” works, in terms of banking procedures and technology, it is difficult to design processes that will meet the set business goals.

Over the past few years, we have delivered several projects involving the development of business applications that replaced the no longer sufficient Profile modules. For example, in VietinBank, whose architecture was very extensive, we have integrated Profile with a number of external applications. One of them was a major integration of Oracle GL, an application supporting General Ledger, which replaced the FMS Profile module (see case study).

In many implementation projects we took part, banks have aimed at improving their digital channels, focusing on increasing the quality of customer experience and offering new products and services. The existing Profile core is doing a great job in a strategic area and will continue to do so for many years to come. However, in order to offer their clients genuinely added value, i.e. services based on personalization and using digital channels, banks need an increasingly extensive IT architecture.

And we help them do just that.